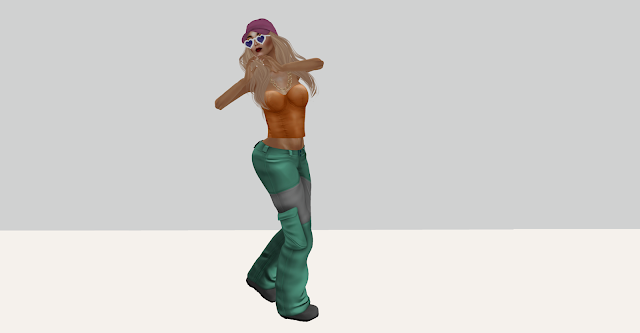 You have probably already heard the song Sorry by Justin Bieber too many times, but have you also watched the music video? I watched it about once or twice, and by once or twice I mean maybe a couple of hundred times. I absolutely loved the video though. It's quite a simple concept, a dance video, but the fun and energetic choreography and wardrobe really appealed to me for some reason.

These cool trousers from Vinyl were perfect for the recreation of the colorful 80's inspired look. The boots were included so need to mess around with mesh sneakers or boots cutting through the trousers. I matched it up with a bustier which is also from which is currently available at Uber, golden chains from Shey and of course a fun pair of sunglasses from Sn@tch. To finish it off I added this hair from Truth, cap included. 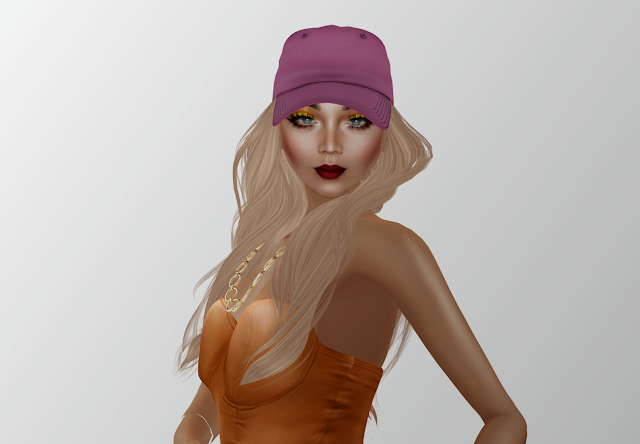 October's 4Seasons really amazes me with the detail and realism of her skins. This recent release, Guiselle comes with 5 different make-up options, 6 different natural options and several appliers. I will be reviewing this skin on my vlog soon so you can see everything that comes with this stunning skin pack.

I recently also picked up the Slink Hourglass body (thanks to Moi!) which I am very happy with and I will mention/review it on my channel some time in the future, hopefully soon. Both the trousers and bustier came with Hourglass (but also various other mesh body) fitted sizes and the skin comes with Slink full body, that includes hands and feet, appliers too.

Before I round up this post I want to give a shout out to my friend Sienna, also known as SL Fashionista on YouTube. She's been amazingly supportive and has kicked me back up when I needed it. She also encouraged me to keep on trying new things including trying out different skin tones ever since my International Beauty vlog for Designer Circle.

Posted by Unknown at 2:03 PM No comments: 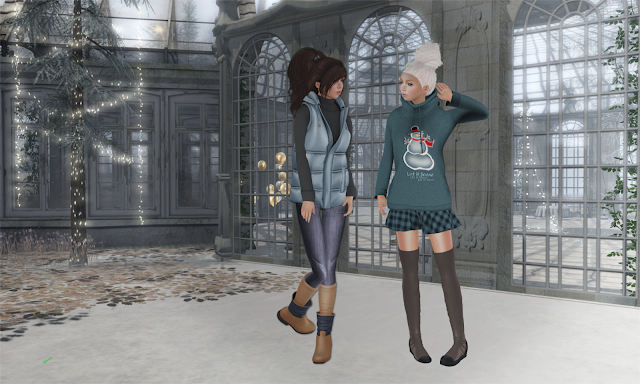 Let It Snow was one of my favorite winter locations for this year. Not only did I snap a lot of pictures there (including this one) but I also had a lot of winterry fun with my friends.

Because I am very lame and geeky I was looking for a matching outfit. And the Hollie outfit from EccentriciXi was exactly what I was looking for. Due to the cold winter weather I matched it up with a pair of high boots from SHEY to compensate for the short, but adorable, skirt.

Entice has also been bringing out December proof apparel including the Cold As Ice outfit. The outfit comes with a pair of matching boots which I have mentioned before in this vlog.
It wasn't until later that I noticed that they had a "Let It Snow" outfit/boots too, so unfortunately I wasn't able to snap a picture of that either. I've styled the outfit with a pair of cozy boots from Loordes of London and the subscriber gift from Truth.

To finish this look off I used two different HUSH skins, both as smooth and soft as snow itself and yes that is a good thing.

I have actually done a full video review of the left skin, Amber2 on my channel. You can watch it for a closer view of the skin and I will also go over everything that comes with the pack.

I also have a full HUSH Skins review playlist if you want to see another one of their gorgeous skins in full detail. I will only be doing these for their new releases from now on.

I never thought I would do one of these, a blog post. To be honest I was quite scared to do it too. "What if it's not good enough? What if I am not the same level as even the average blogger?", I thought. But then I just said screw it and asked myself, "do you have fun taking and editing pictures?" - "do you like second life fashion?" and "since when do you have to satisfy others to satisfy yourself?".

The last question is something I've asked myself a lot of times recently. I've noticed that sometimes I don't feel like vlogging because I feel as if my content won't satisfy the viewer or the designer, while in reality I should be satisfied with my work. Because how can anyone like what you do, if even you can't like it yourself? Some people see it the other way around but I try to not think like that, it'd keep me from doing the things I love and if I'd take it a step further, it would keep me from living the life I want to live. I shouldn't complain though. I get enough positive feedback to keep me motivated and kick myself right back up my vlogging feet when it's needed.

I've noticed that besides the situational demotivation and dissatisfactions, time is also my enemy. I'll tell you why with some numbers...
Preparing a vlog usually takes 1-2 hours (creating outfit, writing notes etc.)
Recording a vlog usually takes about 5-10 minutes more than the actual video for me, I tend to cut out some rambling.
Editing a vlog usually takes about 30 minutes to an hour or two depending on how long the video is. Afterwards I have to take pictures and edit those too which takes about an hour to an hour and a half for one picture or two hours for two pictures (event vlogs).
Publishing is the final step, this takes about 30 minutes. This process includes uploading the video to YouTube, wordpress, flickr etc. (also includes writing the description, blog post & looking for landmarks)
And finally I spend about 10-15 minutes on second life sending out notices and filling in blogger reports.

That is already several hours to a full day or spreading the work over a few days of vlogging. Trust me when I tell you that I don't think blogging is an easy and quick job either, it is not and I know that. But I feel like I do both jobs sometimes as I practically do everything a blogger has to do plus creating a video for each post. Anyway, let's not go there, let's not start comparing these two things as if they are so much alike because to me they are two different worlds, two worlds that can admire one another but can't be one another.

I even ramble on a blog, now that is impressive ain't it? Alright, let's start talking fashion. 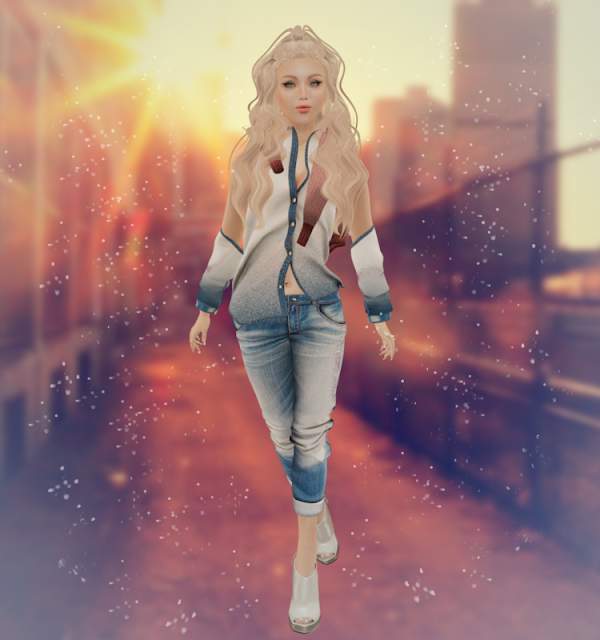 N-Uno had originally brought out the Mila outfit with cut off sleeves and capri jeans for The Chapter Four event which opened from december 13th till the 21st. But don't you worry now. You can still get this shabby-cool (yep I made that up right on the spot) at the N-Uno marketplace store. I styled this "shabby-cool" look with a pair of wedges from Entice which are currently also available for 55L only during their extended 55L Thursday sale. They'll be on sale, together with a lot of other beautiful goodies, until Wednesday dec. 30th. 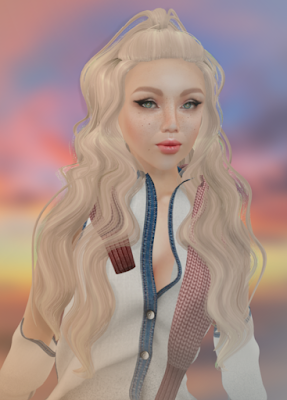 Finally I'd like to mention that 7 Deadly s{K}ins is having its last days of the advent calandar and also an apology that I haven't mentioned the advent earlier in my vlogs. If you missed out on this, you missed out big time. But no worries, you can still get the previous 27 skins, gifts and/or additional goodies for the good price of 75L each. Besides the (7) deadly gifts, we've also been spoilt with tons of new releases this month including this one, Ashley. Ashley comes in 3 different versions, of which I am currently using number 2. She's also available in 3 different tones; apricot (which I am using), pineapple and chestnut.


So that's it for this first blog post. I'll admit it was harder than it seemed, but also a lot more fun. I'll keep it shorter next time, if there is gonna be a next time, promise.

A Message From Chloë

My name is Chloë-Dakota Rose and I am a Second Life Fashion Vlogger (video blogger). I created this blog in December 2015. You can read more about my blog/vlog on the seperate "about" page.
Disclaimers:
1) I will not stop creating video's, my blog is an addition to my vlog~
2) No drama! Keep the bad vibes far away from here~
3) I love a lot of different styles so my blog is a constant fashion carrousel. I apologize in advance if the ride makes you a bit dizzy!

Fair Play is a monthly fantasy event inspired by games. This months game is "The Forgotten Game". Besides this awesome conce... 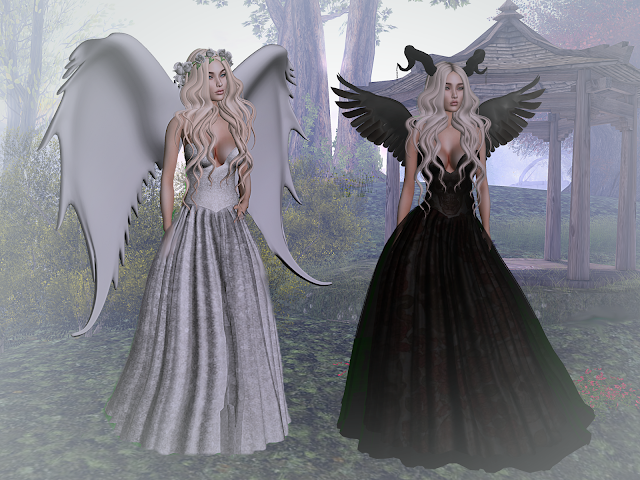